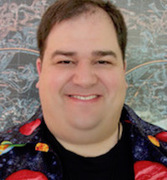 Export to Outlook or iCal (.ics)

Reverend John Marani has been studying the tarot since 1989. He began his professional tarot practice in 2005, and is a Certified Tarot Master from the Tarot Certification Board of America. John is the former Head High Priest of the Tradition of the Witches Circle, and also holds the title of High Priest of Tarot. He teaches astrology, tarot and other metaphysical disciplines, and is a regular attendees at psychic fairs and other events.

John received his Certificate of Astrological Proficiency from the Midwest School of Astrology in June 2018, and will continue to pursue additional certifications in astrology. He is a past contributor to the American Tarot Association's Quarterly Journal, a publication for its members covering a wide range of tarot and tarot-related topics. He presents regularly at the State of the Art (SOTA) Astrology conference in Buffalo, NY.

John is an ordained Minister with the Ministry of Light Interfaith Church in the Commonwealth of Virginia and is licensed to perform marriages here in the Commonwealth. For more information about ministry services, contact John at hierophant@cox.net or at 703-829-3273.

John published his first book, In Their Own Words: The Major Arcana of the Tarot, in October 2016. It is available via Amazon, signed copies directly from John's website, from here at Sticks and Stones, and at select in-person events. His second book is in the works!

In his spare time, John is an avid astrologer, Dungeon Master, and die-hard computer and console gamer. He can be found on Facebook (hierophanttarot and JohnMaraniTarot), and Twitter (@JohnMaraniTarot)

RSVP for Tarot and Astrology readings with John Marani to add comments!