The Origins of Brighid:In Irish mythological cycles, Brighid (or Brighit), whose name is derived from the Celtic brig or "exalted one", is the daughter of the Dagda, and therefore one of the Tuatha d…

The Origins of Brighid: 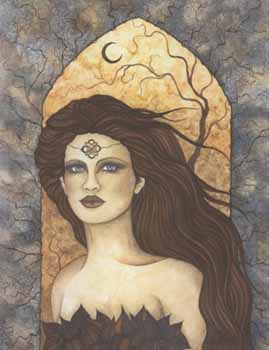 In Irish mythological cycles, Brighid (or Brighit), whose name is derived from the Celtic brig or "exalted one", is the daughter of the Dagda, and therefore one of the Tuatha de Dannan. Her two sisters were also called Brighid, and were associated with healing and crafts. The three Brighids were typically treated as three aspects of a single deity, making her a classic Celtic triple goddess.
Patron and Protector:

Brighid was the patron of poets and bards, as well as healers and magicians. She was especially honored when it came to matters of prophecy and divination. She was honored with a sacred flame maintained by a group of priestesses, and her sanctuary at Kildare, Ireland, later became the home of the Christian variant of Brighid, St. Brigid of Kildare. Kildare is also the location of one of several sacred wells in the Celtic regions, many of which are connected to Brighid. Even today, it's not uncommon to see ribbons and other offerings tied to trees near a well as a petition to this healing goddess.
Celebrating Brighid:

There are a variety of ways to celebrate the many aspects of Brighid at Imbolc. If you're part of a group practice or a coven, why not try Honoring Brighid With a Group Ceremony? You can also incorporate prayers to Brighid into your rites and rituals for the season. Having trouble figuring out what direction you're headed? Ask Brighid for assistance and guidance with a Brighid's Crossroads Divination Ritual.
Brighid's Many Forms:

In Britain, Brighid's counterpart was Brigantia, a warlike figure of the Brigantes tribe near Yorkshire, England. She is similar to the Greek goddess Athena and the Roman Minerva. Later, as Christianity moved into the Celtic lands, St. Brigid was the daughter of a Pictish slave who was baptised by St. Patrick, and founded a community of nuns at Kildare.

In addition to her position as a goddess of magic, Brighid was known to watch over women in childbirth, and thus evolved into a goddess of hearth and home. Today, many Pagans and Wiccans honor her on February 2, which has become known as Imbolc or Candlemas.
Crafts to Honor Brighid:

In many Pagan traditions today, Brighid is celebrated with crafts that honor her role as the protector of the hearth. You can make a Brighid corn doll, as well as a Bride's Bed for her to sleep in. Perhaps the best known decoration is the Brighid's Cross, whose arms represent the place where a crossroads comes together, the space between light and dark.
Brighid and Imbolc:

Like many Pagan holidays, Imbolc has a Celtic connection, although it wasn’t celebrated in non-Gaelic Celtic societies. The early Celts celebrated a purification festival by honoring Brighid. In some parts of the Scottish Highlands, Brighid was viewed as a sister of Cailleach Bheur, a woman with mystical powers who was older than the land itself. In modern Wicca and Paganism, Brighid is sometimes viewed as the maiden aspect of the maiden/mother/crone cycle, although it might be more accurate for her to be the mother, given her connection with home and childbirth.