The May Tree
Sixth month of the Celtic Tree calendar, May 13th - June 9
Sixth consonant of the Ogham alphabet - Huath 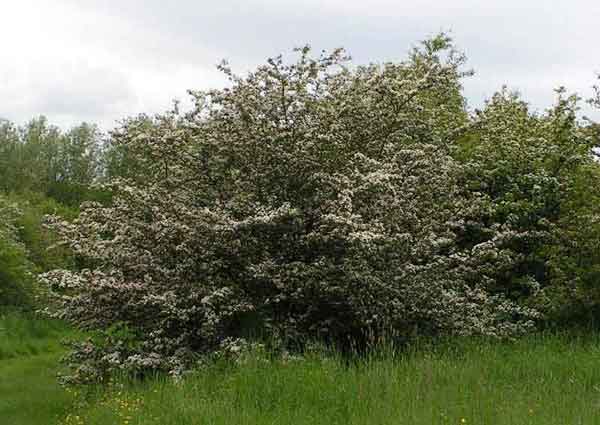 Hawthorn is burned to purify,
and draw faery to your eye.


Medicinal properties:
The flowers, leaves and fruits of the Hawthorn have properties that reduce blood pressure and stimulate the heart, as well as act as a mild sedative.
In herbal medicine they treat heart and circulatory disorders, migraine, menopausal conditions, angina, and insomnia.
The flowers are strongest as sedatives, and used externally can treat acne and skin blemishes.
The berries (also known as "Pixie Pears") contain Vitamin B complex and Vitamin C.
They can be crushed and used to ease diarrhea, dysentery, and kidney disorders.
It is strongly advised against self medication because of the its effects on the heart.

Magickal properties:
The tree essence cleanses the heart of negativity and stimulates love and forgiveness.
The Hawthorn is the tree most representative of the struggles the Christian Church had in suppressing pagan beliefs and celebrations.
Hawthorn is respected as a tree of enchantment under the protection of the faery realms.
It guards wells and springs. Its beautiful flowers are said to help prayers reach heaven.
If you sit under a Hawthorn on May 1st you are liable to be whisked away for good to the faery underworld.
The blooms of the hawthorn are used in spells for fertility, happiness, and good luck in fishing.
To take a blossoming hawthorn branch inside one's house will cause their mother to die.
Wands made of this wood are of great power. The blossoms are highly erotic to men.
Hawthorn can be used for protection, love and marriage spells.

The original May Poles were made of Hawthorn

Hawthorn can be woven in to a growing fence called a Hedgerow.
These thorny barriers are very effective and have saved many villages from thieves and highwaymen.

In England, the hawthorn is known as the mayflower tree in honor of the month during which it blooms.
Symbolizing hope, it was the name the Pilgrims took for their famous ship, The Mayflower. 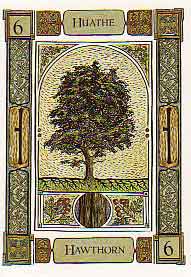 The Hawthorn card represents cleansing and chastity, bringing protection from the inner magical realms - in other words, a period of restraint, waiting or keeping oneself to oneself. Concentrate on mental rather than physical activity as a prelude to the spiritual fertilization, growth and harvesting what will follow, providing such preparation has been properly made as the pure white flowers of the Hawthorn turn to glowing red haws in the autumn.

Along with oak and ash, hawthorn forms the “fairy triad” that is especially inviting to fairies. Hawthorn is, in some ways, the fairy tree, forming a portal to the fairy realms and holding strong magic.

The hawthorn fairy offers access to the Otherworld, but also protects the unwary, so it is important to be patient with this spirit. She can enchant your life, bringing growth and fertility to all areas, and when the hawthorn flowers in spring, it represents the bridal gown of the young Goddess.
Hawthorn is sacred to the Welsh sun goddess Olwen, the “white lady of the day.” Where she trod she left white footprints on hawthorn, and her father, Yspaddaden Pencawr, was “Giant Hawthorn.” Thirteen tasks were demanded of her suitor, Culhwych, before he could marry her and overcome the power of the giant.

Thirteen is a number associated with the moon, for the moon makes 13 circuits of the zodiac to one of the sun. Thus the hawthorn suggests union: of sun and moon, male and female.

The hawthorn fairy promises cleansing, fulfillment, guardianship, and fertility. Keeping grounded and practical is the best way to access her and use her gifts. 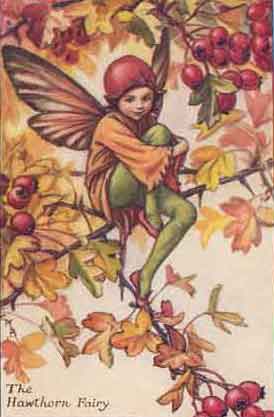 picture is The Hawthorn Fairy by Cicely Mary Barker

Merlin and the Hawthorn Tree
from various sources, as told in Myths of the Sacred Tree by Moyra Caldecott

When Merlin was an old, old man (and none could give a count of all his years) a young girl came to King Arthur's court. Some said she was the handmaiden of the goddess who had emerged from the lake to give the sword Excalibur to Arthur. To look upon she was beautiful beyond belief, but none could see into her heart.

Her name was Vivien, and she watched the wonders of the court closely, soon becoming envious of Merlin's great powers. She determined to lear all she could from him and so beguiled him with her flattery and her beauty that he, sighing, followed her wherever she went and easily gave her secrets that were best kept hidden.

But Vivien was not satisfied with what she learned. She claimed that Merlin was teaching her no more than a child could learn. She wanted more and deeper mysteries to be revealed to her. He demurred, saying that she was not ready. Then, afreaid he would not be able to withstand her pleas and knowing that some mysteries were too dangerous and powerful to be entrusted to someone so young and unwise, he left the court and went across the sea to the forest of Broceliande in Brittany.

She followed him, weeping and telling him her heart was broken because he did not trust her.

At last, with a cunning alternation of the granting and the withholding of sexual favors, she wheedled out of him his last and most closely kept secret: how it was possible to imprison a man within a tree. Within seconds of obtaining knowledge of this spell she implemented it. The mighty Merlin, the wisest of all men, was confined forever within a cage of bark - a hawthorn tree.

The hawthorn is a small tree that was often used for hedging, and it has a mixed reputation. Known to be both a sign of fertility and death, it was said to contain the knowledge of both reproduction and transformation. Both of these processes take time - and if you were born under the sign of the hawthorn, you have an innate understanding of both the importance of process and the necessity for change. Your challenge is to use that understanding to guide you when undertaking new starts - don't rush. Wait, and prepare carefully.
Written by Kim Rogers-Gallagher, and Llewellyn's Witches' Datebook 2000

The Hawthorn is a prickly sort of plant with beautiful blossoms. Called Huath by the ancient Celts, and pronounced Hoh-uh, the Hawthorn month is a time of fertility, masculine energy, and fire. Coming right on the heels of Beltane, this month is a time when male potency is high -- if you're hoping to conceive a child, get busy this month! The Hawthorn has a raw, phallic sort of energy about it -- use it for magic related to masculine power, business decisions, making professional connections. The Hawthorn is also associated with the realm of Faerie, and when the Hawthorn grows in tandem with an Ash and Oak, it is said to attract the Fae.

Hawthorn Moon Magick: Focus on keeping a barrier between yourself and things that you don't want. Aim to push away old problems or lingering irritations. This is a sign of fertility and death. If born under this sign you have an innate understanding of the importance of process and the necessity for change.

The fair maiden who, the first of May,
Goes to the fields at the break of day
And washes in dew from the Hawthorn tree
Will ever after handsome be.
~Neltjc Blanchan
Nature’s Garden 1900 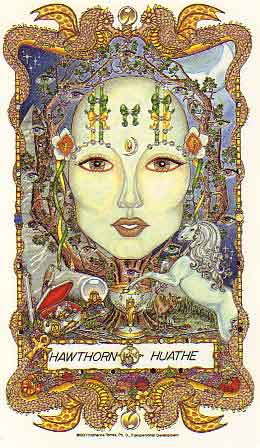 Choices refining life
Emerge from the realm of transfiguration
Will I know or not know?
Will I respond or not respond?
Decisions. Decisions. Life’s a Joyful Game.

What choices are you ready to make?

I honor the energy of hawthorn for cleansing and restraint.
I will choose what I place within my body, and empty myself of all that violates my personal well-being.
So mote it be

from Moon Bee Acres
There is a branch for you to sit upon with a beautiful view.
Climb up into her arms, and stay for a spell.
Feel her roots, her bark, her branches, her leaves.
She is shade, shelter, a home, a hide-away.
She is an escape.
She rocks you to sleep in your hammock.
She holds up your bird feeder, your wind chimes, and your decorations.
She embraces anyone who loves to climb.
In the spring she offers life, and in the fall she gives her own.
She does not judge.
She just is.

Comment by Fullmoonfairy on May 13, 2009 at 9:09pm
Fantastic as always Gwedolyn, of course I rushed to read the fairy bible story, loved it!! And as always learned so much more about the Hawthorn than I knew. I have read something simular to the Merlin story somewhere before!
Thanks as always for the wonderful info and inspiration that you bring to every edition! I look forward to the next learning lesson!