Medicinal properties:
Alder bark treated inflammations, rheumatism, and diarrhea. Bags filled with heated alder leaves helped with chronic skin diseases and burns. A gargle made from leaves and bark cured mouth ulcers and soothed tonsillitis. Alder oil and essence resonate with the Muscular System and can relieve stiffness and damp diseases, enabling us to move forward with flexibility and comfort.

Magickal properties:
Alder helps you face up to the things you've been avoiding.
It also was believed that Alder allowed access into the faery realms.
Alder tree essence is invigorating, and it also reduces nervousness and anxiety.
Spells to aid success in your business and academic ventures work well at this time of year. Sow the seeds of your success now.

Alder roots enrich the soil, and its timber resists decay.
When immersed in water it hardens to the toughness of stone.
Because it was the source of fine strongly colored dyes, it was associated with the art of fabric making and the Goddesses of spinning. Alder reminds us of the need to blend strength and courage with generosity of spirit and compassion.
Alder was sacred to the Druids. The pith is easily pushed out of green shoots to make whistles. Several shoots bound together by cordage, can be trimmed to the desired length for producing the note you want and used to entice Air elementals. The old superstition of "whistling up the wind" began with this custom.

If you felled a sacred Alder, it was said that your house would be burned to the ground. 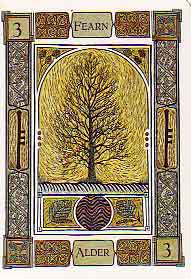 The Alder, like the Willow, is a water-loving tree. Its timber is oily and water resistant and therefore used extensively for underwater foundations: parts of Venice and many medieval cathedrals were built on Alder piling. Bran the Blessed, or Bendegeit Bran, is the god liked with this tree in the Ogham alphabet. He is reputed to have used his body to span the river Linon, forming a bridge to raise his followers above the dangerous waters, as the wood does when used as a building material. Mortally wounded in battle with the Irish, Bran prophesied the events that would follow his death, instructing his followers to cut off his head and carry it with them. They traveled to Harlech, where the head sang for seven years: then to Gwales, the head remaining uncorrupted and prophesying the while. Eventually, they came to rest in London, Caer Llyndain, and buried Bran's head at the White Mount, or Bryn Gweyn, now the site of the Tower of London. It was held that as long as the head remained concealed it would give protection against plague from across the sea. King Arthur, it is said, once dug it up: and unwise actions, since the Saxons then invaded the country.

The Fairy Bible
by Teresa Moorey

The Alder Tree is delicate in appearance, but is tremendously strong and is linked, as are many trees, with the creation of humans, for Irish legend tells how the first man was made from alder, and the first woman from rowan. Such stories indicate that our deepest essence is connected to that of trees - physically, karmically, and spiritually.

Alder has the gift of not decaying in water, so it is used to make bridges. Possibly because of this it is associated with the Welsh god-giant, Bran, who made his body into a bridge across the River Shannon, to invade Ireland and come to the aid of his sister, Branwen. The Welsh were victorious, but Bran was slain. His head - still living, and still possessing oracular powers - was buried in the White Hill of London, and the ravens that inhabit the Tower of London are Bran's sacred birds. It is said that England will not fall while they live there. The alder fairy may fly forth in the form of a raven. He can impart all the secrets of good defense to you, teach you how to look for omens in bird flight and develop the gift of prophecy. 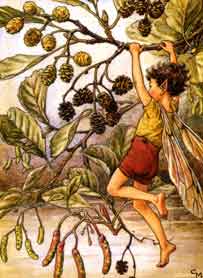 The Song of the Alder Fairy

By the lake or river-side
Where the Alders dwell,
In the Autumn may be spied
Baby catkins; cones beside —
Old and new as well.
Seasons come and seasons go;
That's the tale they tell!

After Autumn, Winter's cold
Leads us to the Spring;
And, before the leaves unfold,
On the Alder you'll behold,
Crimson catkins swing!
They are making ready now;
That's the song I sing!


Alder is a charm against malevolent fairies.

Water sprites are said to protect alder trees, so be cautious of cutting one down.

Equal night, equal day: the Spring Equinox brings a momentary balance of light and darkness on our planet, when "yoginis" of the East and "maenads" (wild women) of the West celebrated their communal festivals. Throwing off the yoke of winter, we welcome spring with shared hearts open. Traditionally animals mate, gardeners break ground, and all the world comes alive again. But there are problems that need facing in our time, with many species losing their ability to reproduce or going extinct from too many poison chemicals in the environment. The birds and the bees are sick and dying. How can we live our lives in joy while staying awake to the larger situation?

Certainly, the problems are too big for each person to face alone. But as the light grows each day, our energies are on the rise and, like plants poking their heads up through concrete, there is an irrepressible movement in each of us toward positive action. Perhaps this is the year to form a Council of Crones or join Code Pink. Pledge yourself to healthy collective action and creative nonviolent resistance.
Vicki Noble - Mother Tongue Ink 2008, and We’Moon’09 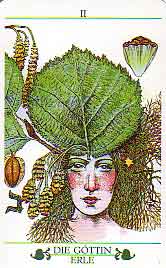 The alder is amazingly resistant to water. As a result, it was often used in construction under water, from bridges to foundations to stilts for homes located close to rivers. This resistance makes the alder a powerful force in psychic battles.

If you were born under this sign, you have tremendous courage in the face of obstacles and the power to win in disputes. Watch for a tendency to create wars where there are none, and be careful not to dissipate your strength through engaging in meaningless debate.
Written by Kim Rogers-Gallagher, and Llewellyn's Witches' Datebook 2000

At the time of the Spring Equinox, or Ostara, the Alder is flourishing on riverbanks, roots in the water, bridging that magical space between both heaven and earth. The Alder month, called Fearn by the Celts, and pronounced fairin, is a time for making spiritual decisions, magic relating to prophecy and divination, and getting in touch with your own intuitive processes and abilities. Alder flowers and twigs are known as charms to be used in Faerie magic. Whistles were once made out of Alder shoots to call upon Air spirits, so it's an ideal wood for making a pipe or flute if you're muscially inclined.

Alder month is the right time to find a way of expressing our hopes and dreams for the New Year, forgiving any leftover angers and coming to terms with what's written in our own Book of Destiny. The Alder grows quickly and its energy can help us move along our Path, forgiving and accepting others and ourselves. For example, if there is a dispute with neighbors, Alder could be planted to restore harmony and turn anger into beauty.


Spells to aid success in your business and academic ventures work well at this time of year. Sow the seeds of your success now.

DayDreamer
In this stone I see a woman resting against a tree, and dreaming of a castle.

Use the energy of grounding to help you manifest your dreams. Along with your fantasy, imagine what steps you need to take in order to make it a reality.

The Faces of WomanSpirit

A Celtic Oracle of Avalon
by Katherine Torres, Ph.D. 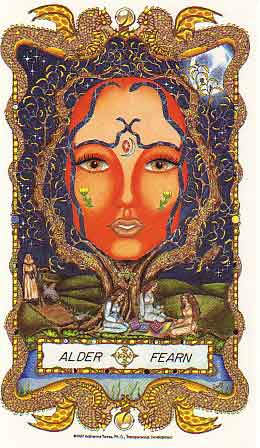 Alder brings the delight of spring into your steps. She urges you to act on your desires without worry or fret.

She empowers you with vigor.

Her delightful orange face compels excitement within you and the knowing that the wisdom you have been gathering can now be used. Share it with others or move on your own, but Go For It, no matter what you are experiencing at this time.


Alder let me see your
Brightness and readiness
Strength and Knowing
Intensity of Action
And youthful vigor
For in this exchange I can
GO FOR IT.

I move forward with ease and grace.
I honor the energy of alder, for the protection of my inner oracle.
I will listen to the voice of the Goddess Within.
So mote it be. 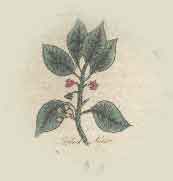