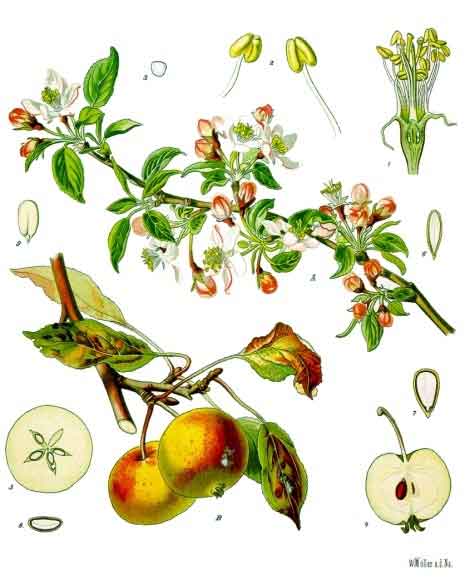 Medicinal properties: Eat peeled and grated unripe apples only for one or two days to help relieve illnesses involving diarrhea. Eat some apples whole for a laxative. Apple wine was an ancient cure-all second century A.D. and make sure the wine is at least two years old. Apples are an excellent source of potassium, iron, vitamins A and E, which are found more abundant in the peel than in the flesh of the apple. They help the body detox, they are beneficial to the brain, liver, and bowls. They are used to treat headaches, gout, rheumatism, high blood pressure. Apple with honey has been a remedy for heart problems since ancient times. "An apple a day keeps the doctor away"

When baked they can be applied as a warm poultice to sore throats and skin inflamations.

Magickal properties: Apple is a great wood for a magickal wand. It is a favorite witch tree. The fruit is used at Mabon and Samhain, and for love spells. Eating an apple opens the gateway into other realms, most often faeryland. It provides illumination and the gaining of knowledge. Dreaming of apples symbolizes prosperity and the good life. At Samhain, winning the game of bobbing for apples meant that you would be blessed by the Goddess for a year. Since apples were symbols of Avalon, capturing one from the water represented crossing to the holy isle. The apple is also considered one of the foods of the dead, so they are often piled high on Samhain altars, for Samhain is sometimes known as the "Feast of Apples."

In 19th Century Lower-Saxon Germany, the first bath water used by a newborn baby was poured over the roots of an apple tree to ensure that the child would have red cheeks, and if it was a girl, large breasts!

Apples and apple blossoms are symbolic of love, healing and immortality. Burn the blossoms as incense, wear as a perfume, and make them into herb candles for a handfasting.

Wassailing - the practice of wishing good health and a bountiful harvest for fruit trees - is a centuries old English custom still practiced in some cider orchards today. The largest apple tree in the orchard is selected and then celebrated by throwing cider on its trunk. 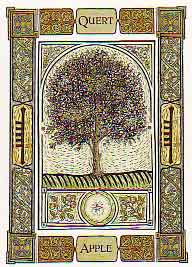 This apple card represents a choice of beauty, the beauty of life and youthfulness. Linked to this is Avalon, or the magickal "Apple-land." Glastonbury is set within the Celtic Applelands. From the Welsh poem "Avellenau" we learn that the Bard Merlin secretly revealed to his lord the existence of this orchard. It was borne from place to place by the enchanter on all his journeying. The ignorant, however, must not eat of its fruit, for within the Apple is contained a Pythagorean pentagram. Cut it width-ways and its secrets are revealed in the shape of its pips. This gave beauty in the judgment of Paris, to Aphrodite.

Born in America in 1774, John Chapman, later called "Johnny Appleseed," was a dedicated, eccentric nurseryman with a compelling mission. Raising, planting, and distributing apple trees was his life's passion. Many Believe that he only "gave" away his trees, but actually, he charged a "flip penny bit" (six cents) for a sapling or sold them for uncollected promissory notes; he also accepted used clothing as payment. When poor farmers couldn't pay, he then gave away his trees.

The seeds for these trees he collected from cider presses in Pennsylvania, transporting them westward in bags on his back, on horseback, or sometimes in canoes. While roaming the Ohio River valley, he planted more than thirty-five orchards in Ohio, Indiana, and Illinois.

His generosity, uncouth appearance and odd clothes all have contributed to this apple-tree legend. In addition he was uncommonly kind, cheerful, friendly with the Native Americans, knowledgeable about herbal medicine - and a religious Swedenborgian.

In 1845, after years of exhausting walking - ill clad, ill shod, poorly protected from the weather, often sleeping under the stars - Johnny Appleseed died in Indiana, presumably of exposure. The words on his gravestone read - "He lived for others." 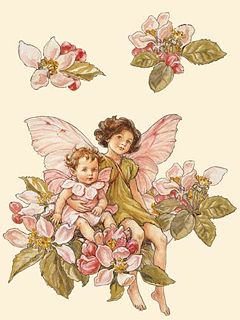 The apple fairy is extremely beautiful and frequently seductive. Apples were considered the fruit of the gods in Celtic lore, and the apple tree has many associations with magical creatures. The unicorn lives underneath it and in spring the sweet apple blossom offers home to may flower fairies who spread an atmosphere of love and happiness.

The gifts of the Apple Fairy are everlasting youth and beauty, although sadly such matters often give rise to strife.... The apple fairy invites us to enjoy sensuous pleasures of all descriptions, in the knowledge that there is plenty to go around, and that nothing that is truly ours can ever be taken away from us.

My Imagination
by Stacy Anne Murphy

Imagination and I were rocking by her hearth the other night, two old crones in the firelight, knitting a coverlet to blanket the world with love. Imagination and I go way back 0 back to those days when I was playing with my toes, ogling at my parents.
"Maj," I asked, "have you been up to some mischief? 'Cause last Tuesday I was feeling you mighty strong."
Imagination threw back her head and let out a laugh that shook the world like jell-o, her rainbow tresses gyrated in the firelight.
"Oh my, last Tuesday!" Maj chortled, her voice rasping like a saw blade laced with honey. "Last Tuesday I was howling at the moon like a wolf in heat, howling at the moon to drive uppity old Luna crazy. Luna told me 'Hush your odious face!' So I stuck out my ruby tongue and started leaping from star to star, shaking stardust all over the place.
"Now you know stardust tickles like nothing else, tickles like an army of ants marching under your skin! Before hoity-toity Luna knew it - she was shaking and rolling and jiggling about with one serious case of the giggles. She almost fell right out of the sky! I howled with laughter and Luna howled right back at me, smiling despite herself."
Some people have imaginations who are charmingly refined, lady-like and proper. That's not my Imagination. She and I are bawdy broads, ready to laugh, embrace life - two old crones, rocking in the hearth light late at night, knitting a coverlet to blanket the world with love.
Stacy Anne Murphy 2006, and We'Moon'09

"A seed hidden in the heart of an apple is an orchard invisible."
- A Welsh proverb 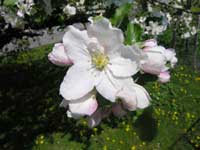