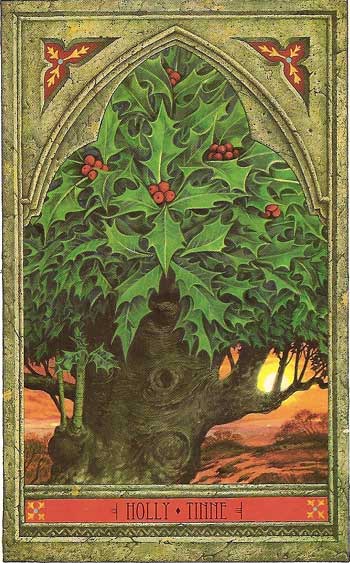 Medicinal properties: The powdered leaves were brewed into a healing tea for measles, and the ashes from burning the leaves in a drink soothed whooping cough. Hot compresses made from the leaves and bark helped ease the pain of broken bones and dislocations.

Magickal properties: A "par excellence" protective herb, it protects against lightning, poison, and evil spirits. When thrown at wild animals it makes them lie down quietly and leave you alone. Sprinkle an infusion made with Holly on newborn babies to protect them. Holly is considered the male counterpart to the female Ivy. Even though Holly's Yule festival greens are traditionally burned at Imbolg, a small sprig us kept for luck and to keep evil away throughout the year. To grow a holly in your garden is to bring about good luck. Rumor has it that holly leaves were once called "bat wings" (so if you ever run into a spell that calls for bat wings, you'll know where to find them.)

CAUTION: Holly Berries are purgative and often cause nausea and vomiting. They are poisonous to children.

The Holly is best in the fight. He battles and defends himself, defeating enemies, those who wish to destroy him, with his spines. The leaves are soft in summer but in winter, when other greenery is scarce and the every-green Holly is likely to be attacked by browsing animals, the leaves harden, the spines appear and he is safe. The old name for the Holly is Holm, preserved in names such as Holmsdale, Surrey, whose motto is "Never wonne, we never shall." With the coming of Christianity, the Holly became the Holy tree, the tree symbolic of the crown of thorns, so representing the fighting of the soul's battles that eventually unites this life with the one that follows and, also, runs parallel.

The Holly is male, so symbolizing paternity and fatherhood. With the Ivy and the Mistletoe, the Holly has always been regarded as a potent life symbol, both for his year-long foliate and for his winter fruits.

Holly is another tree sacred to the Druids, who brought it within their homes in winter to offer shelter to the fairies. Like the oak, holly provides a home to many sprites, and its spirit is a guardian and a warrior. The holly fairy brings courage and the warrior spirit. He will help you with any internal or spiritual struggles, and can awaken powerful healing abilities.

Holly is especially sacred at the Winter Solstice, serving to usher in the new life of the sun god. Its evergreen leaves are a sign of endurance. If you meditate close to a holly bush you may receive warning or encouragement from the holly fairy.
~The Fairy Bible by Teresa Moorey

Lammas
On August Eve, we honor and give thanks for the bonanza of a harvest yet to come, as the first fruits fall from the tree. In England, the Full Moon rises and sets over Silbury Hill, which ancient people perceived to be the belly of the birthing Goddess. Traditionally (even now) this holiday initiates a period of State, Country, and 4-H Fairs in the US where what has been grown is shared and judged. At Native American pow-wows, people gather to share friendship, food, creative arts, dance and ritual. Bonfires are still lit on hills all over Switzerland for national Independence Day - but clearly as a remnant of the ancient holiday known all over pagan Europe.
Please the spirits by making an offering of art on this day. One easy way to offer up a spontaneous "feast" of beauty and gratitude is to make a collage from magazine images, note cards, calendars and the like. This is a magic spell. Choose images without censoring yourself - select all those that catch your attention whether you "like" them or not. Surprise yourself!
Vicki Noble - Mother Tongue Ink, and We'Moon09

Holly wood was used by the ancients in the construction of spear shafts, and as the spiny leaves show, it is well prepared for battle. A symbol of firmness and masculine energy, the holly endows those born under its sign with an equally well-prepared nature. You have a strong connection to the earth, amazing physical strength, and the ability to direct your energy in a balanced even flow. This stability gives you a generosity of spirit ad a very matter-of-fact solidness that others will respect, admire, and rely on. Before you engage in any battle, look inside for understanding and respect for your opponents.
Written by Kim Rogers-Gallagher, and Llewellyn's Witches' Datebook 2000

Although the Oak ruled in the previous month, its counterpart, the Holly, takes over in July. This evergreen plant reminds us all year long about the immortality of nature. The Holly moon was called Tinne, pronounced chihnn-uh, by the Celts, who knew the potent Holly was a symbol of masculine energy and firmness. The ancients used the wood of the Holly in the construction of weapons, but also in protective magic. Hang a sprig of Holly in your house to ensure good luck and safety to your family. Wear as a charm, or make Holly Water by soaking leaves overnight in spring water under a full moon -- then use the water as a blessing to sprinkle on people or around the house for protection and cleansing.

Those born under this sign have a strong connection with the Earth and possess amazing physical strength. Your matter-of-fact solidness and generous spirit are respected and admired by others. As the days shorten after summer solstice and the moon grown in power. focus on putting bad situations behind you.

Holly berries were used to predict winter weather. If there were a profusion of berries, that meant it would be a hard winter, because the Goddess was providing extra berries for the birds.

Holly is one of the three timbers in the Chariot Wheel.

It represents personal sacrifice in order to gain something of greater value.

Dreaming of Holly means you should be mindful of what is troubling you, and picking holly in your dreams means you will have a long life.

After midnight, on a Friday, without making a sound, gather nine Holly leaves. Wrap these up in a white cloth using nine knots to tie the ends together. Place this beneath your pillow and your dreams will come true.

The Faces of WomanSpirit
Talented One express through me.
Light of Goddess easy to see.
Balance and truth for all to use.
Holly your energy we all will muse.

I honor the energy of holly, spear of the warrior.
I will not remain passive and victimized, but will choose to fight for my own freedom.
So mote it be. 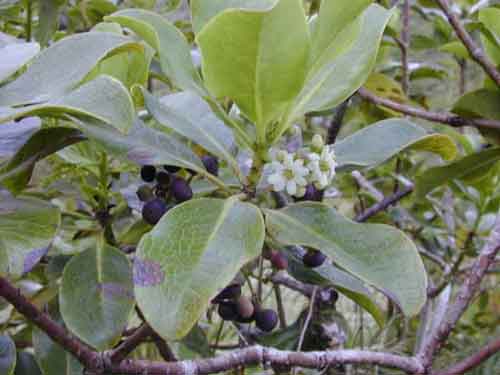