Triple Goddess of Poetry, Healing, Smithcraft.
The Virgin as Muse.
Bride of the White Hills.

Her symbol is the white swan. She is connected to Anu as Brigid is considered to be the "daughter" of The Dagda, usurper of Anu's place as the deity of the Tuatha de Danaan, one of the most ancient peoples in Northern Europe. Affiliation with the letter L, luis, ROWAN, MOUNTAIN ASH and QUICKEN. Rowan was considered sacred to Brigid, and was used by the Druids to compel demons to answer questions, as well as for divination and oracular use. Candlemas was considered the "quickening of the year," Feile Brighde, the first of the great Irish fire feasts. I've noticed that spring comes sooner when this Moon, the "quickening of the year," occurs early in the year. 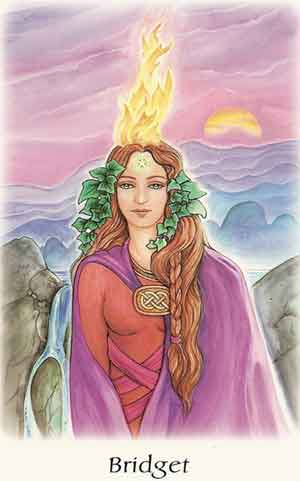