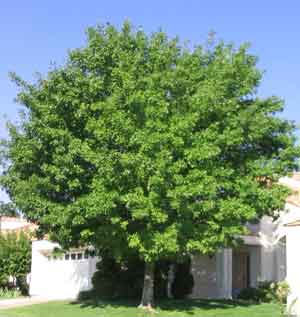 The World Tree; Tree of Life

Medicinal properties:
Ash bark can make an infusion that is a mild laxative and diuretic. The rood bark is the most potent with astringent properties, and was used to treat liver diseases and arthritic rheumatism. Other uses include reduce fever, treat kidney and urinary infections, expel intestinal parasites, and treating malaria.

Magickal properties:
The leaves attract love and prosperity. Burn Ash wood at Yule to receive prosperity. Sleep with them under your pillow and you will have psychic/prophetic dreams. Sleep with them in a bowl of water next to your bed to prevent illness. Wearing garters of green ash bark protects against the powers of magicians. Ash can heal children just by passing the child through a split in the tree's trunk. It promotes strength, harmony, and a sense of being in tune with your surroundings.
In an ancient Greek creation story, humans were formed from Ash and Oak trees.
Ash, Oak and Hawthorn make up the triad of powerful faery trees. If you stand in the shadow of an Ash, the fae will leave you alone. Put Ash berries in a baby's crib and the fae will not steal it and leave a changeling in its place.
Ash wood was used for the traditional handle of the besom broom. Druid wands were often made of ash because of its straight grain. Ash wands are good for healing, general and solar magic.
Ash Tree attracts lightening, so don't stand under one during an electric storm.
Ash is the key to healing the loneliness of the human spirit, forming a link between the gods, humans, and the dead in the spirit world. Ash holds the key to Universal Truth and Cosmic Wisdom, and it takes on the important role as a Tree of Initiation.

Ash, seeker of Spirit
teach me to make holy my journey.
Help me move past Illusion.
Lead me to my heart -
The place of Magic. 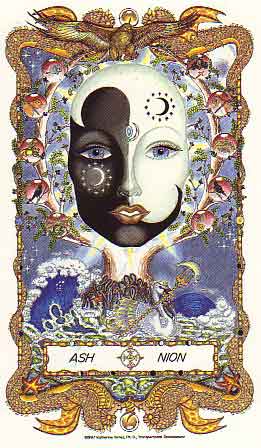 This Moon Mother Ash calls you to awaken hidden realities and find the Divine Mother. In a measureless expanse of consciousness you will find the tomb of the Great Goddess. You are beckoned to discover it and your own goddess reflection as you ride the mysteries of this Moon Mother.

From the light of Ash the path of return opens to the memory of your divine feminine self. Ancient wisdom is revealed. Ritual is enacted. Re-membering your goddess self occurs. Service to the Great Goddess is lived and magic returns to your life.

Ash is a healing tree, so two ash twigs may be fashioned into a solar amulet, and the solar energies used to help fight off the wintertime blues. Create this amulet on a nice, sunny day. Take two small ash twigs about six inches in length, and tie them together into an equal-armed cross (also known as the solar cross.) Fasten a gold ribbon at the center of the twigs, and knot the ribbon three times, saying:

By the powers of the ash tree, herb magic, and the sun,
Do as I will, bringing harm to none.

Then hold the amulet up to the sunshine, and bless it with the following charm to ward off the winter blues and to encourage healing:

I take two ash twigs, and tie a ribbon round,
A simple solar amulet I have bound.
Bring sunshine to my life and guard me, I pray.
Keeping those wintertime blues far, far away.

You can Hang this amulet in a prominent location in your home, or tuck it into your locker or desk at work. This amulet would also be easy to adapt to a pocket charm, if you keep the twigs about two inches in length. Now, you have yourself a little portable solar amulet. 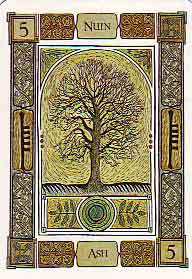 The Ash tree has deeply penetrating roots and sours the soil, making it difficult for other vegetation to grow beneath it. Its twigs are thick and strong. In Norse mythology, this tree spans the universe - its roots in hell, its branches supporting the heavens and with Earth at its centre. In Celtic cosmology in particular it connects the three circles of existence - past, present and future, or as confusion, balance, and creative force; there being no fell, but only continual rebirth as passage is made from circle to circle until the Land of the Blessed is finally reached.
Also, the Ash can be seen as spanning both microcosm and macrocosm, the little world and the great world. In this interpretation, man and Earthly things are reflections in miniature of the universe, the cosmos being reflected in us, and thus expressing the meaning of the old expression: as above, so below.

Through stories and through my shamanic work, I began thinking about ancestral memory and what if? What if the wounds I carry are not solely from my lifetime, but also from my mother's, my father's and grandparents' passed genetically and psychically? What if the multiple abuses I have processed in therapy are from ancestral wounds as well as current, and what if the connections extend beyond even ancestral lineage to some kind of interspecies link?
I feel lighter when I entertain these thoughts and constantly renew my commitment to my path of healing, not only for my family and myself but also for all beings. I am beginning to see that the web of life weaves connections between all of time, space and place. And how each small healing benefits the whole cosmos.
Janice Young 2006, and We’Moon’09

The Fairy Bible
by Teresa Moorey

The Ash Fairy is androgynous and ambiguous, carrying great mysticism and power and making many connections: between this world and the Otherworld, between masculine and feminine, and between differing ideas. The ash fairy understands that problems are rarely solved on the level at which they were created.

The most famous ash was the Norse World Tree, Yggdrasil, on which Odin hung, to receive the wisdom of the runes. Thus ash possesses indescribable knowledge - things we cannot really know in our heads and can only reach through expansion of consciousness. Ash fairy may bring the gift of poetry, which has the power to evoke ideas and associations that elude the conscious mind. Ash is associated with communications of all sorts. Witches were believed to fly on ash-handled broomsticks, while Viking ships were made of ash. Many ancient cultures believed that humans originated within the ash - for instance, souls were born in the branches of Yggdrasil. The goddess Nemesis carried an ash branch. And so ash fairy teaches balance and unity in diversity. It takes an open mind and breadth of soul to travel in the Otherworld!

The ash tree is famous, although anonymous, since it's the tree from which the Hanged Man is suspended in tarot decks. The roots of the ash penetrate deeply into the earth, and the tree itself is known for its speed of growth. Its energy, then, also builds quickly, but is dispersed just as fast. Born under this sign, you have a "knowing" of the connection between ourselves, our planet, and our universe. You feel the pain and joy of all other creatures, from trees to animals to those humans less fortunate than yourself. This lends a compassion to your personality that's incomparable.
Written by Kim Rogers-Gallagher, and Llewellyn's Witches' Datebook 2000

This is a good month to do magic that focuses on the inner self. Associated with ocean rituals, magical potency, prophetic dreams and spiritual journeys, the Ash can be used for making magical (and mundane) tools -- these are said to be more productive than tools made from other wood. Love spells and loved ones should be foremost in our minds in early spring.
Born under this sign are those who have a knowing of the connection between ourselves, our planet, and our universe. You feel the pain and joys of all living creatures, which makes you most compassionate. Other traits: Uncommonly attractive, vivacious, impulsive, demanding, does not care for criticism, ambitious, intelligent, talented, likes to play with fate, can be egoistic, very reliable and trustworthy, faithful and prudent lover, sometimes brains rule over heart, but takes partnership very serious.

I breathe Life easily. I speak my truth. I am protected. I am at one with the Universe.

I honor the energy of ash, the magician's staff.
I will recognize that "as above, so below," I play a part in the larger scheme of things.
I will link my inner and outer worlds.
So mote it be

Comment by Gwendolyn on March 19, 2009 at 9:51pm
I am happy to share my passion with everyone who loves the trees as much as I.
Thank you my sister for your kindness and encouragement.